Should the International Criminal Court also be a Development Agency?

A proposed visit to the Democratic Republic of the Congo (DRC) by the Altus Global Alliance to encourage police reform there is a starting point for reflection on, respectively, the issue of complementarity, the situation of the police in the DRC and the work of Altus.

The principle underlying the concept of complementarity is, according to “Paper on Some Policy Issues Before the Office of the Prosecutor of the International Criminal Court,” promoting the idea “that States remain responsible and accountable for investigating and prosecuting crimes committed under their jurisdiction and that national systems are expected to maintain and enforce adherence to international standards.” This article looks at how the noble aim to facilitate or provide international assistance can be implemented by the International Criminal Court (ICC) in The Hague. It also looks at the proposed mission to Congo (DRC) to encourage police reform as well as the work of the new Altus Global Alliance. 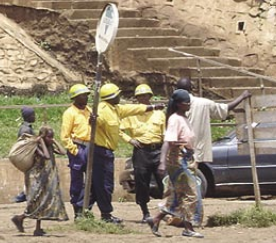 It is interesting how Mr. Moreno Ocampo has given an innovative interpretation to the concept of complementarity, which was probably introduced to be a tool to protect State sovereignty. Instead of letting it be an obstacle, it has been introduced by the Prosecutor as a principle to enable the International Criminal Court (ICC) to help States to bring to trial in their own countries some war criminals and in general reinforce the rule of law. And this is another issue where the ICC is being confronted with its limits. The ICC might bring to trial in The Hague “only the high-ranking officers of the highest in the chain of command”4 accused of crimes against humanity or war crimes, although investigations against those lower in the chain of command might be opened, “if such investigations of a certain type of crimes are needed for the whole case.”
And the Prosecutor writes that “for other officers, alternative means for resolving the situation may be necessary whether by encouraging and facilitating national prosecutions by strengthening or rebuilding national justice systems, by providing international assistance to those systems or by some other means.”

Obviously the ICC may only be able to provide international assistance in a very limited way. This is because the ICC is and will stay a Court and is not an International Development Agency like the United Nations Development Programme (UNDP). Not being a Development Agency, the ICC needs to mobilize the help of others, in particular NGOs which can respond faster to…